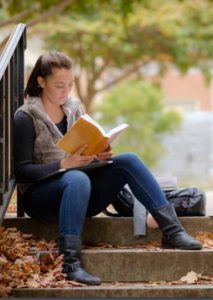 Wake Forest has a long tradition of engaging in a summer academic project on an issue of intellectual and social importance.  The tradition includes setting aside time during New Deac Week for students to engage with a faculty or staff member on this issue.  It is a favorite New Deac Week activity. For 2020, the Project Wake theme is “Identity and Community.”

College is a time where you will experience significant individual growth, all the while figuring out how to be a member of your home community and your new Wake Forest community. This experience may not always be harmonious or intuitive, and it often requires vulnerability, resilience, and empathy. Join your fellow classmates in Project Wake 2020 to examine what identity and belonging to a community means by engaging with literature.

As a participant in Project Wake, you will be asked to consider ways that you bring a unique perspective in developing a broader community. You will be asked to consider how your own identity development and values may shape how you interact with others and build community.  What unique attributes do you bring to broader experiences that we share at many different levels? For example, you are one of many students with the shared experience of beginning your studies at Wake Forest this fall; what related challenges, excitement and concerns do you bring with you? At a much broader level, as a worldwide community we have experienced challenges of pandemic response with shared and individual perspectives within our communities. What ways did community provide support to you during that experience and in what ways did you find challenges related to community?

Project Wake will give you the opportunity to explore these and other questions about maintaining your individuality while being a member of a variety of communities.  A work of literature that interests you will serve as the launch point for these conversations.  The questions of what community is, the benefits and responsibilities associated with being a member of various communities, and how to ensure that we thrive as individuals AND community members are relevant to the decisions you will make daily as you embark on this college journey.

You may choose among books from many different genres and disciplines, which will lead you to a group that shares your interests and concerns. These group conversations have proven to be an exciting and meaningful way to make new friends and discuss issues that matter.

2020 Book Listing - Learn more about each book and discussion leader below:

New Undergraduate Students (For Class of 2024)